Arizona senator, Jeff Flake, tilting the scales as at present.

Will of Heaven finally had its word in terms of a supplemental background investigation by the FBI into the current credible allegations against Judge Kavanaugh no later than a week from this day.

While the proverb held true for the Republicans, the Democrats have every reason to feel happy that it didn’t in their case, eventhough the timeframe and the limited scope of the investigation may not be enthusing.

Whether Judge Kavanaugh comes morally uncontaminated and wins his spurs to sit on the Supreme Court ultimately;  whether Christine Blasey Ford’s case comes out uncertain, unclear, and unclean ultimately; – the  ‘Winner’  finally is the transformational power of  “Women”  that is already on the rise and set for a great leap.

As a  ‘common man’  I am strongly tempted to place the frank encounter, the two women (allegedly suffered assaults in their lives though not pertaining to this case directly) had with the Arizona senator, Jeff Flake, in the elevator on his way to the Judiciary Committee room in the morning of 28 September 2018 as the event that triggered the historic order for the Supplemental investigation by the FBI. 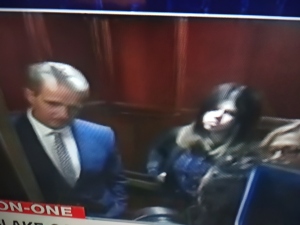 Their words, specially, “Sir, you’ve children too. Are you prepared to accept a tainted individual to sit on the Supreme Court?”  are the  “voices”  of the hearts of women as a whole.

That probably was ringing, and moving almost every cell of the Senator, Jeff Flake, to change his decision firmly, finally.

The Senate Judiciary Committee examined the accuser and the accused with their faces and words during the hearing, but could probably have missed their hearts and minds really, which possibly will be revealed in clearer terms from the Supplemental Investigation. ( I mean any extra evidence supporting or otherwise of accusations from anyone, anytime, from any place through the investigation.)

That character is the most difficult thing for a human to recover makes the task of FBI all the more onerous in this case.

Both Judge Kavanaugh and Christie Blasey Ford must have already lost a lot in terms of trust, reputation, words of praise, and recognition – specially during the last two weeks – that the results of FBI supplemental investigation assumes the role of a ‘fortuneteller’  in their lives.

Hope is their bread now.

Notwithstanding the outcome and the final decision of the Supreme Court nominee in a week from now,  Senator Jeff Flake of Arizona and the two ladies who interrupted him in the elevator on his way to the Judiciary Committee room  should  be credited with bringing about the transformational change in the  Voices of Women in future while assigning a special pride of place for them that will likely grow faster than the speed of sound from now on.

Scene of the lady questioning senator Jeff Flake in the elevator.