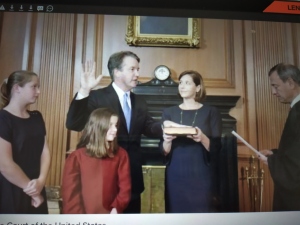 President Donald Trump scored a  ‘hat-trick’ – a highly productive and efficacious accomplishment before midterm elections –  last week that included (a) a good job report with 134000 jobs added in September with unemployment at a 50 year low of 3.9 % ,  (b)  successful negotiation of USMCA that will replace NAFTA,  and  (c)  the highly valued symbol of success earned in the case of Brett M Kavanaugh’s nomination to the Supreme Court on Saturday.

Of the three, the third assumes greater significance as the course of events since his July 2018 nomination has turned it into a prestige fight and a referendum on the President’s style of governance.

–  September 27, 2018,  hearing before the Senate Judiciary Committee remains as one of the highly watched events on work computers, televisions, and cellphones;

–  Quite a few employees spent 2 to 3 hours watching the event during workday;

–  Productivity loss estimated is about $ 1.8 b per hour;

–  With further discussions and disceptions between employees and people, the total loss is estimated to be about $ 8.8 b ;

–  Estimate based on calculations is also that 80 % of workers attend their jobs on any weekday;

No other nomination of Justice in history has witnessed this huge cost. This is a reflection of the importance accorded to this event this time specially.

Brett M Kavanaugh is now the 114th Associate Justice of the Supreme Court.

He will be officially sworn in on Monday night 7 p.m. (ET) at White House’s  East Room.

What appeared to be an easy path descended into one fraught with accusations of sexual assault ;  a final FBI  investigation after the hearing ;  and before the motion to confirm his nomination by the Senate was set in quickly.

This was something that could have been avoided.

What happened in reality was the spread of ultra emotions and extreme displeasure of most citizens who may not have been even initially concerned and knowledgeable about the nomination itself.

This is Politics, where the basics of unconscious manoeuvres to put a lid on emotional outbreaks do not see the light or reason.

The accusations and counteraccusations are perhaps the result of what psychologists often term as  ” Gunnysacking” – (accumulating all grievances and letting it all go in one final moment  – after 36 years in this case –  with the sack punctured).

“What goes around, comes around” has been the open reaction revealing the feelings of the accused bluntly to say that  he “won’t suffer in silence”.

” 100%  certain ”  utterance of the accuser in this case is a reaction coming as it did from a lady – who in society was not supposed to blaze up –  that sounded credible and assertive.

Now that the final outcome is before everyone, the focus shifts to the oncoming events and policies/programs for the safety, welfare, and prosperity of citizens. 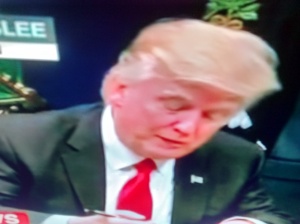 Nobody can doubt that the true “winner”  standing tall at this moment is President  Donald Trump.

Tidbit :  ” Most of those who would like to move mountains don’t like to practice on the little hills “.