” Is Alexandria Ocasio-Cortez a Trendsetter in Modern Politics or a Pander to the hoi polloi ” – February 23, 2019. 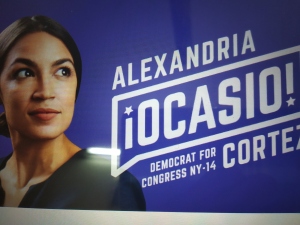 Republicans see a refulgent glow on a resolution to be voted next week, with prospects of division in the Democratic party and unison in their own party for the good of the great 2020 contest.

That the Green New Deal may be one of the key issues at stake in the upcoming 2020 Presidential election having a striking impact on the voting pattern cannot be dismissed easily. If Democrats pick the right side holding the votes for this deal, they can even be outstanding winners.

Whether the Green New Deal can match the impact of ‘immigration’ as the key issue in 2016 election which catapulted Donald Trump to the Presidency is, however,  in doubt.

Green New Deal or Climate Change Plan is now construed as being Alexandria Ocasio-Cortez’s  baby who seems to be trying to pick the groups that would vote with this deal even while quite a few Democrats themselves feel that she is erring on the wrong side. On the other hand, if she inspires her party functionaries and supporters to strive for effecting the deal in a realistic manner, rather than making this a case of Columbus starting out not knowing where he was going, where he found himself in, and where he had been in the end – all at other people’s money, she would have done a great favor to the party.

Green New Deal speaks of :  (a)  Upgrading and rebuilding every building in the U.S.A.  to conform to energy efficiency standards ;  (b)  Put the lid on traditional forms of energy in 10 years;  (c)  Decommission nuclear plants in 10 years ;  (d)  Put an end to air travel by building high speed trains across oceans ;  (e)  Plant trees rather than investing in carbon capture and storage ;  (f)  Unionize all new jobs ;  and  (g)  Make carbon tax and cap and trade as a tiny part of Green New Deal plan .

No specifics on how and where the money will come from except that it will be paid as in earlier instances – ‘New Deal’;  ‘World War II’;  ‘Bank bailouts’;  ‘Tax cuts for the Rich’;  ‘Decades of war’  … A pie in the sky deal.

Alexandria Ocasio-Cortez’s proposal has received more criticism than support.  While embracing the enthusiasm of members for the ownership of the concept, House Speaker, Nancy Pelosi, nevertheless, dubbed that as “Green Dream”.  Alexandria Ocasio Cortez in reply said :  ‘It’s a great dream, and that she does not consider the reaction as ‘dismissive’.

Howard Schultz, former CEO, Starbucks, contemplating a Presidential run in 2020, called it “unrealistic”. He was, specially, critical of the proposal to give ‘ a job to everyone ‘  ( it is impossible );  and reconstructing all buildings in America ( about 2000 to 3000 buildings everyday,  again  impossible  or  extremely difficult ) .

Criticism seems to be justified on many counts. Chief among them is that many of her ideas seem out of touch with reality in terms of implementation over the period cited.

Alexandria Ocasio Cortez is, however, confident that balancing Climate Change and Economic Inequality in a way that will protect the environment while preserving and promoting job opportunities is the right path forward for U.S.A.’s  progress and growth.

Will the Green New Deal give the Democrats a vital plank to fight the elections in 2020 ?  Many doubt that.

Is this Alexandria Ocasio-Cortez’s chief aim ‘to attain the peak of popularity’ on this issue or will she get to touch the pique only ?

At this juncture, to me, it appears that she is caught in her own trap. Wait to see what the senate voting says.

Tidbit :  ” Getting rid of emissions from cows and all airplane travel is an inherent element of the Green New Deal “. –  Alexandria Ocasio-Cortez ( Congresswoman,  D-NY ).