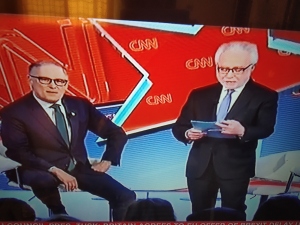 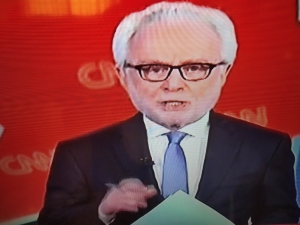 Wolf Blitzer of CNN, the Moderator.

Usual topics as we have seen in the earlier town hall meetings with Democrats this season.

Gov. Jay Inslee announced his candidacy on March 1, 2019, for the Democratic nomination for President of the U.S.A.  in the 2020 Election.

Here are the key aspects that I would like to put forward for information and assimilation :

1.  Gov. Jay Inslee’s rise to prominence :  Figure below shows the three elements of work that made him prominent : 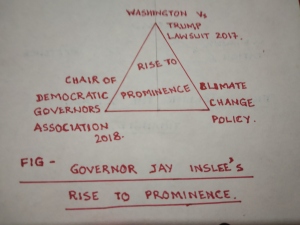 (a)  Washington vs Trump, a lawsuit jointly filed with Attorney General, Bob Ferguson,  challenging Trump administration’s order ( executive order 13769 ) to ban entry from 7 muslim majority countries in 2017.This earned a temporary restraining order. Gov. Jay Inslee garnered national attention because of this.  (b)  As Chair of Democratic Governors’  Association during 2018 Gubernatorial elections he oversaw Democrats gaining  7  net Governorships nationwide. This propelled him to national attention again.  (c)  His emphasis on Climate Change and as a critique of Trump Administration’s policies, he made people turn their heads with a larger focus on him. 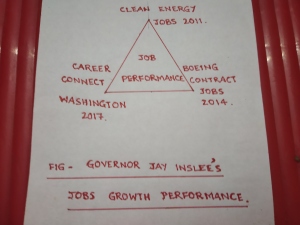 (a)  In 2011 he focused on Job Creation marking dozens of proposals to enhance job growth in Clean Energy, Biotech, and Aerospace industry.  (b)  In January 2014 he initiated the renewal of Boeing’s Contract with Seattle area Union employees to build its Boeing 777x aircraft in Everett. This brought 1000s of jobs to Washington.  (c)  In December 2017 he initiated Career Connect Washington creating a Task Force with many stakeholder groups including Amazon, Boeing, Microsoft, and Kaiser Permanents. Result was an increase in Apprenticeship opportunities for 29000 youth in 11 communities. 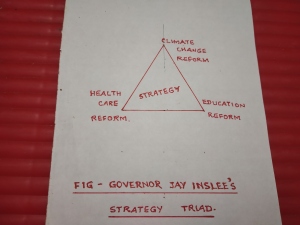 The  ‘Strategy triad’  comprises three aspects :  (a) Climate Change reform – this is as much a moral issue as it is an economic issue according to him. It is also his primary motivation to contest in 2020 Election.  (b)  Healthcare Reform : As with every other democrat in this election, healthcare is a key strategic issue for the Governor.  (c)  Education Reform :  Not just making education tuition free, he is a strong proponent of financial and food support for pre-K education and school education plus first two years of post-K higher education. 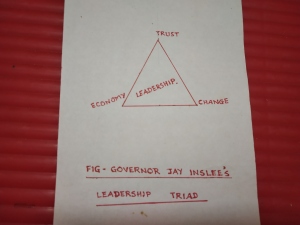 The  ‘Leadership Triad’  comprises three aspects :  (a)  Trust  :  For increasing the ground of Confidence between parties as a  ‘responsibility’,  as a group to control  ‘expenditure’,  as policymaker to improve ‘production’ ,  and  as financial steward to earn  ‘high returns’ .  (b)  Change  :  As a leader to display a sense of strong belief in  ‘transition to a new system’  or  ‘to a new condition’  in a smooth manner.  and  (c)   Economy  :  He pitches for a judicious and efficient use of resources being careful but not necessarily frugal.

Some general observations from Commonsense perspective :

1.  Gov. Jay Inslee portrayed himself as someone ready to learn from mistakes even as it appeared to a common man like me that he can be easily managed too.

3.  Soft headed and soft hearted as a person, he seems to like soft options for all the problems without being a soft touch – a rare quality for a politician of today’s world.

Conclusion  :  Gov. Jay Inslee has no qualms distinguishing himself as a leader obsessed with or possessed by a  “Single Strong Idea “,  without excluding others’  points of views. Unique and outstanding in this respect, creating a special identity for himself,  but whether this symbolic trait could win the hearts of the electorate will always be in doubt.

Tidbit : ” I am not part of the resistance, I am the leader of it “. –  Gov. Jay Inslee while answering the question on ‘resistance’ to Trump’s offence of the values of the State.