President Donald Trump’s tweets, aimed at reassuring and enhancing the confidence of citizens of a well managed economy sustaining the growth pattern, have been the apt feed for the news channels engaged in analysis of impact and consequences – short term and long term. Reactions – positive and negative, in good earnest or gravely capricious, realistic or Imaginative – influence not just the stock market swings but also the perceptions of the citizens shaping their opinion on Leadership. The discussions in print and electronic media often reach a maximum evoking emotions among the analysts, stakeholders, and the citizens considerably. Result is a market volatility mostly characterised by short term gains with long term unpredictability. This is followed by another set of tweets by the President justifying or otherwise the market behavior and this cycle of activities continues as the movement of events in a story.

The figure below represents the above detailed vicious circle of events succinctly.

The above sequence of events help the President in two ways :  (1)  It helps to keep the President harping on the one string of ‘economy strength’  that he has been praising, recommending, and advertising as an accomplishment ;  and  (2)  It helps to buy time to prolong his popularity among his base even as he feeds this as profitable information to people.

US – China  Trade War is another event that raises the scope for prolonging President Donald Trump’s popularity among his base.

President Donald Trump has been consistently charging China with practices that cause harm to the US economy since the time he announced his candidacy in June/July 2015.

That China has been stealing trade secrets;  that China has been coercing technology transfers ;  and that China has been subsidising its own firms – all without keeping its commitments has been the  US’s  main grievance. With a view to bring China to the negotiating table, President Donald Trump imposed tariffs as a punishing measure – first, he hiked the tariffs from 10% to 25% on $ 200 billion worth of Chinese imports ;  China retaliated with 25% tariff on $ 60 billion worth of US imports, mainly agricultural sector. The expectation was that China will lose economically and become weak. An additional $ 300 billion on goods will come under tariffs target in case the meeting between Donald Trump and Xi Jinping does not materialise with fruitful discussions during the G-20 Conference later in June.  Both nations realise that continued cooperation is necessary to prevent rivalry in political and military conflicts. But both remain obstinate without yielding as at present. It makes for the following three scenarios to emerge, develop, and grow each presenting an advantage at the moment to President Donald Trump. 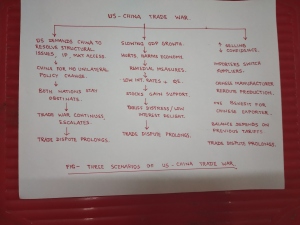 Scenario 1 :  US demands China to resolve structural issues ;  IP protection ;  and market access. China does not act on these but remains firm that it will not make any unilateral change to its policies. This stance does not make any negotiated settlement possible the result of which makes the trade war continue and escalate. This scenario helps prolong the Trade dispute between the two nations impacting globally.

Scenario  2  :  Tariff increases cause slowing of US  GDP growth ; in the process hurting and harming the country. As part of remedial measures the US will resort to low interest rates possibly followed by Quantitative Easing to lift the stocks and promote growth providing relief to the analysts, stocks, stakeholders, and to the citizens in general. This makes the trade war continuing or escalating without any compulsions from the two sides for a quick settlement. This scenario helps prolong the Trade dispute between the two nations impacting globally.

Scenario 3  :  Tariff increases cause panic selling in some sectors bringing with it ‘low confidence’  in general. Importers from both sides may switch suppliers;  cultivate and buy from new markets ;  or buy from domestic markets even if the cost is high. Chinese manufacturers are already rerouting production to Vietnam, Indonesia, and Taiwan. It works better for Chinese exporters also. This scenario also helps prolong the Trade dispute between the two nations impacting globally.

All the above three scenarios point to a favorable disposition gained by President Donald Trump in terms of his strategy paying its due. The chief reason for this is that most actions/strategies in this respect make their impact felt over long term while on short-term maintaining the status quo or making the people perception better.  “Bold and Cautious action is being taken”  may even be the verdict of a good section of people.

This also  helps the President to tide over his many personal challenges ;  embarrassing reactions to his administrative moves on Mueller Report and subpoenas ;  the gradually rising challenge to his  second term underscored by the growing disenchantment with his leadership ;  unpredicted crowd of aspirants to democratic nomination for the 2020 Election getting emboldened ;  and the prediction in some quarters of a grave economic distress in late 2019 or early 2020.

It is not known clearly as to when or how a challenge to this mechanism, and by action a level of discomfort and successful opposition to the President will actually emerge as the Democrats are keenly hoping for.

Tidbit :  ” Leaders seem to do well when they are under attack “.