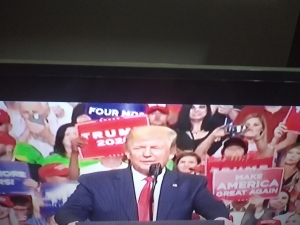 President Donald Trump launched his Campaign for 2020 with a big rally as the ‘launcher’ ;  in Amway Center, Orlando, Florida, as the ‘launching pad’ ;  quite spiritedly, enthusiastically, and even venturesomely ( amid his low rates of popularity vs four Democrats in Florida, polls Quinnipiac released just) with the occasion witnessing a nearly filled arena.

President Donald Trump claimed Florida as his second home and State from where exactly 4 years ago this week he first announced his candidacy for the 2016 election, a pleasant coincidence.

The points that President Donald Trump advanced in his 40 minute speech are :

1.   2016 was a defining moment in history. His government stared down the line of lobbyists and other clingers in Washington DC.

2.   Economy now is thriving, prospering, booming, and soaring to new highs. American economy is the envy of the world.

3.   Nobody has been tougher than he has been during his reign uptil now.

4.   There has been no Collusion, no obstruction. ( Ref to Mueller Report ).

5.   We got rid of individual mandate of Obamacare. (Ref benefits to citizens ).

6.   US  has the lowest employment rate now. ( an accomplishment ).

7.   Tariffs on China is working (reassurance on US economy being strong).

8.   Democrats want US splintered and divided (a political charge against opponents).

9.   American dream is bigger and stronger than ever before ( morale boost to citizens ).

(a)   The rally speech, if anything, gave an indication that President Donald Trump will stick firmly to his proven prescriptions that catapulted him to power in 2016 rather than attempting to strike a new chord with voters in terms of the economic advancements made during his term uptil now.

(b)   ” Building a wall in the Southern Border,  Draining the swamp in Washington DC ,  and  fake news categorization of the media ”  constituted his election prescriptions and methods for achieving his goal of Presidency in 2016. The same recipe will likely continue this time too.

Only the polls in 2020 will show if this holds.

Tidbit : ” If you can make a better claptrap people will beat a path to your door “.