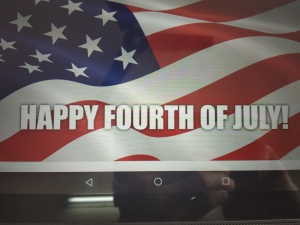 What is Fourth of July,  the American Birthday about ?

The Fourth of July is the anniversary of the publication of the ‘Declaration of Independence’ from Great Britain in 1776. It is usually celebrated as a National Day with patriotic displays and family events organised across the U.S.A.  It commemorates the independence of the 13 American colonies from the British Colonial rule marking the political separation from Great Britain.

A discussion for and against is raging ever since the Government proposed a military parade to display the military might of U.S.A. in the lines of what has been in vogue in say, North Korea, China, Russia, or even France.

U.S.A.  as a nation emerged after liberation from foreign rule, i.e. Great Britain, and it would appear logical to mark this occasion with a military parade among others, a practice that has not been evident or witnessed upto now.

But there are atleast three reasons why it is not needed.

Figure below depicts the three reasons why America need not have a parade on the Fourth of July : 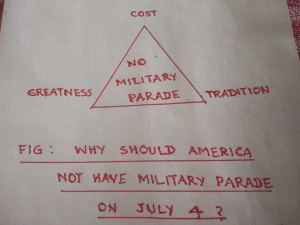 First,  the cost of organising a parade is felt too huge to be acceptable or reasonable, and economic restraint is now a necessity. Excessive cost will have to be met from the taxpayers’  money, a not too desirable solution. The extra expenditure can otherwise be channeled productively for enhancing the quality of Life of American citizens. A military parade is an extreme that can be avoided. The arguments above seem to justify the faith the common people have in restraint and order.

Second,  it is not in American traditions to celebrate an event like this with a military parade. Rather, it should be a day for American citizens to enjoy their time with relations in entertainments that will make them happy. Such national days in general are celebrated across the world (in different countries) with flag hoisting,  fireworks,  award ceremonies,  kids’  activities,  entertainment,  and other Cultural Programs.

Third,   a National Day distinguishes itself from other holidays by evoking a sense of Unity among Citizens (German National Day, October 3);  a sense of oneness among the Citizens (British celebration of Britishness, no National Day in Great Britain);  or a sense of National Values (French commemoration of National Values, July 14) with attendant fireworks and entertainment. America is a great nation recognised for its greatest military power on earth riding on the remarkable strides it made (makes still)  in innovative technologies and avant-gardist defence capabilities that a military display may not be a necessity. It is also in line with admission of its constitution giving its citizens the power to govern themselves by choosing their own government assuring Citizens of equality, justice, and liberty.

So how do we link it to the National History?

Recollect, remember and celebrate the historical events on the Fourth of July filled with moments, historic and tragic, in every institution, organisation, and workplace. 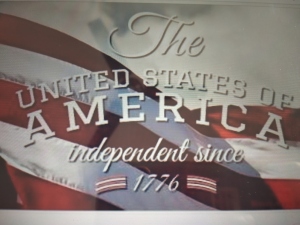 July 4, 1872,  was the natal day of the first President to be born on nation’s birthday, the 30th President, Calvin Coolidge.

On July 4, 1804,  first Stagecoach line between Philadelphia and Pittsburgh was inaugurated. On July 4, 1817, work on Erie Canal began. On July 4, 1828, first rail of the Baltimore and Ohio Railroad was laid.

The  cornerstone of the towering obelisk erected in the nation’s capital to the memory of George Washington was laid on July 4, 1848.

Death came to John Adams, and Thomas Jefferson, two of the distinguished signers of the ‘Declaration of Independence’ while nation was joyously celebrating the 50th anniversary of its adoption. Five years later on July 4, 1831, James Monroe, fifth President, and framer of the Monroe Doctrine died.

America has come a long way as a nation under the wisdom and guidance of many of the farsighted former Presidents.

Tidbit  :  ” Russia Day celebrates accomplishments of Russians worldwide and a celebration of the Russian culture and identity – (June 12, 1992).” 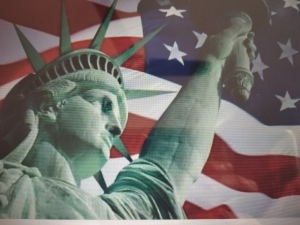