The Democratic Presidential bid field is the most diverse possible now expanding the scope for comprehending and considering a range of topics of interest from the candidates in debates. It has also made the debate matter more for the US citizens. There are now 20 candidates overall in the Democratic bid.

CNN has scheduled its Democratic Primary Debate on July 30  &  31.

CNN is also keen to avoid any bias that may reflect poorly in the conduct of the Debate. To avoid this, it has enlisted as its goal to have recourse to a creative, fair, and transparent process of a sampling strategy, hitherto unadopted, perhaps, in US Election History.

For the two days of debate, CNN applies a  “draw”  based on random choices to fix the candidates to a particular day. The process is simple :

4.   Take one candidate card and one date card to be placed on the board. See figure below:

The action continues till all the candidate cards and date cards are matched.

The whole sequence of actions is repeated in three stages ;  first for 10 sets of cards ;  then for 6 sets of cards ;  and finally for 4 sets of cards. This is the only step that can be taken to be subjective but affording, nevertheless, a fair method to place the candidates in either of the groups based on their popularity as at present.

Superiority of the process lies in the following :

1.  Random choice with a lottery method has been used to fix the candidates for either of the two days ;  it eliminated sample bias, though usually difficult to achieve because of effort taken ;  it afforded every candidate an equal chance of getting selected for one of the two days ;  it is a process that helped build “fairness” within the selection.

3.   The final groups selected, however,  represent the entire array of issues of interest to the US citizens in the General Election and to that extent it is fairly inclusionary. A commendable effort.

The figures below represent the candidates thus selected and assigned to the two days of the debates ,  July 30  &  31. Their podium order is also seen clearly. 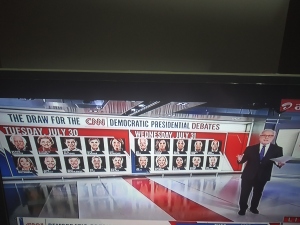 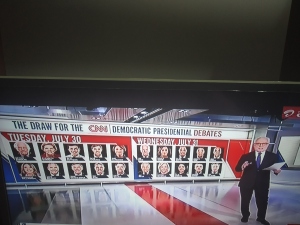 These are my concluding points :

1.  Based on the parameters considered, CNN’s choice of random sampling has been effective with good potential to script the desired questions and elicit answers that most US  citizens would benefit from.

2.   The Debate is expected to give an opportunity to candidates to redefine their positions and make amends for their mistakes in their first debate in June.

3.   The Debate gives an opportunity to the candidates to prove that he/she can take on Donald Trump better in the General Election.

Final placement and podium order of candidates for July 30 & 31 debates.

CNN has done the initial testing well;  it will be interesting to see if the questions posed in the Debate and the views and ideas from the candidates helping  US citizens to deduce a clear picture in respect of each candidate will be met, matching the testing process ultimately.

Tidbit :. ” Statistics are like alienists ;  they’ll testify for either side.”  –  FH  La Guardia.