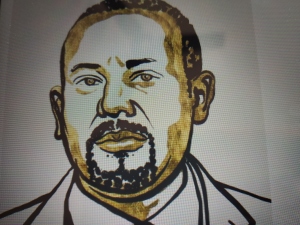 The most coveted five letter word is “peace”  and not money, honey, music, dance, faith, glory, dress, photo, even Bible or Quran.

Ethiopian Prime Minister,  Abiy Ahmed Ali, (43),  today secured  “peace”  not just for himself but for all nations and stakeholders who are part of this socially beneficial exercise.

Norwegian Nobel Committee today awarded the Nobel Peace Prize to Ethiopian Prime Minister, Abiy Ahmed Ali,  who sought  “Reconciliation, Solidarity, and Social Justice”  through his efforts to achieve peace and International Cooperation and in particular for his decisive initiative to resolve the Border Conflict with the neighbouring Eritrea. He is selected by the Committee as the person who contributed most to peace in the last 12 months.That he is one among 301 nominees in this category speaks volumes for the recognition of his leadership too.

The  Nobel Committee this time has stuck to its tradition of awarding the peace price to ‘diplomats or political leaders’.

Since he became Prime Minister of Ethiopia, Abiy Ahmed Ali, had concentrated his focus on  ‘ lifting emergency,  releasing 1000s of political prisoners,  unblocking hundreds of media outlets,  lifting bans on opposition parties,  and prosecuting human rights abusers’. These transformative efforts have been viewed as commendable, specially in an era where democracy and human rights are seemingly on the decline in most parts of the world.

Ethiopian Prime Minister put an end to the continuance of border disputes between Ethiopia and Eritrea and signed peace agreement with the Eritrean President, Isaias Afwerki, paving the way out of the two decades old conflict. He is convinced that ‘peaceful, stable, and successful’  Ethiopia will have positive side effects and help strengthen fraternity and nations. Many other challenges remain unresolved, though. Keeping desires under check, and blending new initiatives with acts that benefit the Society will be paramount.

Ethiopia is Africa’s 2nd most populous country and East Africa’s largest economy. His efforts deserve recognition and encouragement –  said the Norwegian Nobel Committee while announcing the award. It is also a recognition of all stakeholders working for peace and reconciliation in Ethiopia and in the East and North East African regions, it added.

This award is also a recognition of youth.

If this sets the tone for the resolution of similar conflicts for peace in other regions of the world, it would be a great turning point to universal peace in the history of the world.

Tidbit :  ” Peace does not arise from one party alone. When Ethiopian Prime Minister reached out his hand  Eritrean  President, Afwerki, grasped it.”