Well known for his honorificabulitudinity, Canadian PM, Justin Trudeau is on course to gain his second term today with results heading towards the possibility of a minority Government with Justin  Trudeau at the helm.

As I write this Justin Trudeau’s Liberal Party commands 107 seats ;  Conservative Party with 77 seats ;  New Democratic Party with 17 seats ;  and  Bloc Quebecois securing 14 seats.  Green Party is yet to open its account. Canadian Parliament has 338 seats. 170 seats are needed for majority  and  with the support of the left leaning parties Justin Trudeau will likely form the Government . Justin Trudeau’s Liberal Party alone is expected to win 146 seats according to predictions. The Conservatives may get 100 seats or less in the end.

Canada is a nation that strives to preserve the Democratic values internationally. It also gives life to those who suffer without any support or security in the world. Notable in this context is the Programs formulated for Sri Lankan and Syrian refugees specially. The refugees have been accommodated with humane considerations and gesture in Canada. This is one big reason that many in the world loves to live in Canada. 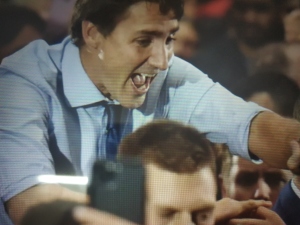 Justin Trudeau is a very well respected Canadian leader by crores of people across the world. Quite significant is the fact that he harbours a special love and affection for the  vernacular language,  Tamil. Hence, it is no surprise that he is extremely popular among Tamilians in Canada. Tamilians in Canada are mostly from Sri Lanka.

While the most significant, powerful, and big nations in the world like America, India, France  ..  boast of right leaning governments, Justin Trudeau’s victory breaks that Hoodoo. Canadian Tamils  welcome his return in a big way.

Conclusion :  Justin Trudeau’s principles and platforms mimicking the U.S. Democratic Party (Healthcare, Gun Control, Climate Change .. )  and  his victory for a second term may well be the thin end of the wedge reflecting on the  2020  US  General Election. I, for one, will be eager to follow the course of events in the days and months to come.