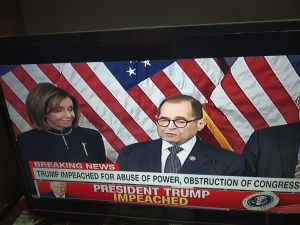 President Donald Trump’s Impeachment and impelled by the Democrats  based on House Intelligence Committee’s report seems to rest on two major accusational acts of “abuse of power, and obstruction of the Congress”.

Abuse of power pertains to seeking a favor from the Ukrainian President during the phone call on July 25, 2019.

Obstruction of Congress pertains to his instructions to the witnesses to ignore the subpoenas and refusing to deliver documents, e:mails, etc sought by the Congress.

The whistleblower report revealed that President Donald Trump has asked the Ukrainian President, Volodimyr Zelenski, in July 2019 to investigate Joe Biden, Trump’s likely political opponent in 2020 Presidential Election; as well as his son, Hunter Biden, and the company Crowd strike ;  and to discuss these matters in exchange for the Congressionally mandated $ 391 million military aid package plus a meeting at the White House.

1.  Memories, thoughts, and beliefs triggering the feelings of the lawmakers after a fierce debate on the articles of Impeachment on the floor of the House tonight prevailed in favour of the decision to impeach President Donald Trump, only the third President to be impeached in the history of America. (Andrew Johnson in 1868, and Bill Clinton in 1998 are the other two). Pure logic justified the actions of the lawmakers in this decision.

2.  It emphasised that a strong belief in national security;  upholding the values, rules, and laws enshrined in the Constitution ;  and a definite escalation of Commitment with past experiences overrode any individual differences that can likely diminish the outcome.

3.  People of America at this juncture may well be filled with a mixed set of feelings : Fear and Joy ;  Anger and Support ;  Sadness and Happiness ;  Trust and Distrust ;  Disgust and geniality  …  …

4.  Those engaged in management studies and application will be eager to classify the decision as one that will leave a mark on what we generally read  as  ” major,  tactical policy, and group decisions”.

5.  Impeachment pertains to a difficult one in terms of tackling a ‘major’ national problem for which the solution may look simple by the provisions/procedures in the Constitution but one that is not easy. Hence, this is a  ‘major’  decision.

6.  This is a  ‘tactical’  decision as it is likely to impact the foreign policy (the Ukraine call of July 2019 by the President) of the nation. These are policies formulated and followed by the executive arm of the nation impacting not just the host nation but others in terms of allies and foes. Its functioning is a matter of genuine concern of the people too.

7.  It is a  ‘group’  decision as the abuse of power relates to the act of an  ‘individual’ , the number 1 in broad policy framework makers of the country. It is the involvement of the top most executive of the nation. This will require a majority support to correct the wrong, which means a collective or group decision is the right and appropriate method of tackling it.

Conclusion :  Democrats  have taken  the decision after carefully and thoroughly considering the action that they need to take in a characteristically programmed manner since September 2019. They also felt strongly that this is of extreme importance to the nation. Whether this is likely to have an impact on the goals, strategies, and broad policy structure framework in future remains to be seen. Also, whether the will of the people remains strong will be interesting to watch. Constitutional Democracy seems to remain upheld at this moment – will this be the verdict now ?  I don’t know.

Tidbit :  ” Standing up for the Constitution is the prime task of any lawmaker”