Watching on TV, the case that the Democratic Managers were making in the Senate Impeachment Trial of President Donald Trump was a pleasant exercise in listening and understanding for me. Lead Impeachment Manager, Adam Schiff,  Chuck Schumer,  Jason Crow, Hakeem Jeffries,  Joe Lofgren,  ..  made their cases on January 22, 2020.

Purpose of the Exercise :  Democratic House Managers and President Donald Trump’s Counsel along with his team to engage in their exercise of respectively presenting their cases to persuade and to drive home the point in order to influence the Senators (both Democrats and Republicans) in supporting their arguments.

Salient Observations from a Common Man:

1.  Effectively the substance overall is a recapitulation, reiteration, and reproduction of what happened in the House of Congress in September-December 2019 when the 17 witnesses were interrogated in public.

2.  Every manager stuck to the focus on the need to impeach President Donald Trump ;  every manager concentrated on the core message(s) ;  every manager seemed honest and enthusiastic in his/her arguments ;  every member used attention grabbing images on slides and video clips ;  and every manager possibly effectively connected with the viewers all over the nation and the world.

3.  Lead Impeachment Manager, Adam Schiff, set the stakes very well describing what failure to act will look like ( setting a dangerous precedent,  a disaster for the nation,  loss of faith in democracy, and  neglecting the safety and security of the nation ) ;  how painful it will be emotionally for the Citizens ;  alternately how peaceful, grateful, and tolerant that the Citizens will feel with peace, safety, and security.

4.  Adam Schiff also laid emphasis on the constant struggles that his team had to make in their journey against the stream, while at the same time making clear the chain of obstacles faced by them in making their cases more strong in the House ( not having been allowed the rightfully sought  witnesses  and documents ). Despite that, they were  ” moving in the right direction ”  was the essence of their case, he averred.

5.  Adam Schiff also placed emphasis on what and how things are not what/how they should have been in this case,  hence,  their efforts to engage in this Impeachment has been not just harped on but repeatedly echoed ( by other managers too )  during the presentation. Describing how/where the things are now and how/where should be ( with no influence or interference by any foreign power in US elections ),  the case managers sequenced the contents as a stay without ennuying. 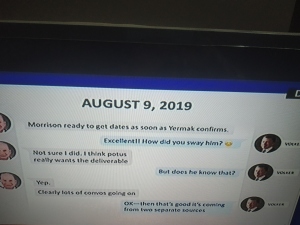 A piece of reported conversation.

A piece of reported conversation (Giuliani and Volker).

6.  The presentation was enhanced by the use of slides, and video clips ( using statements, tweets, conversations, depositions, comments ) elevating the routine but special one of this nature to an engaging exercise in academics propelling the listeners  ( all over the country and the World )  almost programmed to listen and understand the content in true form.

(a)  The managers seemed keenly aware that creating and promoting the curiosity of what they delivered was their primary challenge and they must have achieved that today. Specially, Adam Schiff overcame the hurdle with his sprinkling of certain specifics ( as for e.g. citing a cable from a Vietnam veteran not being allowed in drawing a parallel )  which could have further strengthened their arguments that Ukraine is our ally and we are extremely concerned.

(b) “Seeing is  believing” – and the visuals during the presentation were so great that they must have captured the attention of the audience ( Senators and Citizens ) and made the performance of managers truly of a good standard. Adam Schiff at the end looked like seeking everyone to join the ‘democratic movement’  with a  ‘yes, we can’  moment to prevent the dangers to good governance.

(c)  Management students and analysts should not have any excuse to miss the event in the next few days –  an event fashioning itself to be a  ” model  presentation exercise ”  at the highest political level. That the Republican managers will also strive to match/outperform the Democratic Managers cannot be dismissed easily.

Tidbit  :  ” At every repetition the Democratic Managers pressed the Impeachment closer to the chest “.