State of the Union Address is information to the Congress and the people on “how the President complies with Constitution’s order from time to time ;  he reports on the State of the Union ; and makes necessary and expedient recommendations.

Figure below represents President’s accomplishment triad during his three years :

love
The three components of the triad are :  (a) Restoring American Leadership,  (b)  Manufacturing Might (Trade Deals),  and  (c)  America First (Inclusive Society).

(a)  President  assured that US is leading to restore democracies in Cuba, Venezuela, Honduras ..  ..  We are also getting our NATO allies to help paying their fair share. They are meeting their obligations atleast twofold now. Venezuelan opposition leader, Juan Guaido, an invited guest at this function has been assured of the US support to his ideals in the transformation of Venezuela. Israel and Palestine Peace Process he struck last week was a significant part  of his speech. 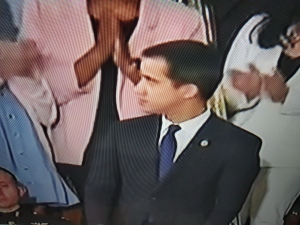 (b)  President Donald Trump proudly shared the $ 12  trillion in wealth added during his three year period uptil now together with job creation, rising wages, and employment christening the period as the  ” Blue Collar Boom” . 12000 new factories now after losing 67000 factories in the last Government,  USMCA deal likely to create 100000 new jobs, manufacturing rebound and relief upon the unveiling of the Phase 1  trade deal between US and China,  slowing of the contraction of employment sending a positive signal to economy – are some of the highlights in this context.

(c)  To buttress his claim of inclusive  policies and programs, President Donald Trump cited the following :  Plan for vocational and technical education in every school in America ; Permanent funding for the nation’s historically black colleges ; An iron-clad pledge to American families not to be blindsided by the medical bills, bill for price transparency, protecting people with pre existing conditions, fighting strongly the Opioid Epidemic to attain good control, fighting AID epidemic in an effort to end it by the end of this decade .. He reiterated his three-fold measure of decreased drug prices, price transparency, and increased access to healthcare as being critical to affordable health program.

1.  President Donald Trump may have succeeded in engaging the concerns and emotions of the people with a good level of  ‘satisfaction’.

2.  The Success of his Government and the real bottom line of American working class must have received his care and attention.

3.  If in 2019 his address came after the Democrats enhanced their grip in the Congress from the mid-term elections of 2018 ;  his address now comes after the Democrats’ Impeachment trial. (President Donald Trump will most likely be acquitted tomorrow). That this would certainly have hastened the speed and occurrence of physical, emotional, and governance challenges cannot be missed.

4.  If it was “Strength and Unity” in 2019, it is the “Great American Comeback”  tonight highlighting his privileged preference policies aligned well with his supporters and Citizens in general batting in a line. Coming at the backdrop of the 2020 Election, the President made the best of this occasion.

5.  His emphasis on cooperation, compromise, and common good as the main recipe for solving the nation’s problems may have resonated well with the Citizens at large. Significant to note was also the fact that his recent setbacks have only made his resolve to rise without holding back.

6.  Adopting an ideal approach of presenting people who have been afflicted and took efforts to get the conditions reversed, he sought to get funds from the Congress for Cancer cure, premature babies protection, and child care. This aspect needs commendation. 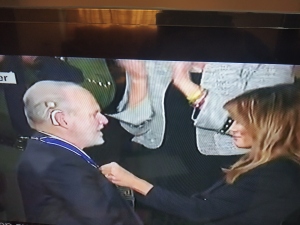 Rush Limbaugh receives the Freedom Medal from the US First Lady.

Conclusion  :  Actions to reinforce his message and keep the People engaged will be the key step from now on.