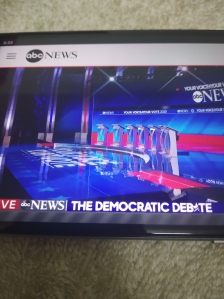 Chief issues that voters consider critically as felt by the candidates are presented below :

Joe Biden, former VP,  holds the strong opinion that voters’  concern will be :  Economy (job growth, wages, unemployment) ;  Policies of Government (in respect of Education, infrastructure, immigration, foreign relations) ;  and the  Electability of the Candidate. He carried his propositions beyond its natural limits to be of significance to a vast section of population.

Bernie Sanders, Vermont Senator, considers the three major factors impacting the voters to be :  Healthcare ;  Climate Change Impact ;  and No Wars but Peace only. He claimed that his proposals in respect of the three will resonate strongly among voters.

Elizabeth Warren, Senator from MA,  felt the chief demands of voters will be :  A safe and secure world ;  Climate Change Impact ;  and  Allocation of money to Programs for People. On all these three aspects her position carries important merits – she averred. 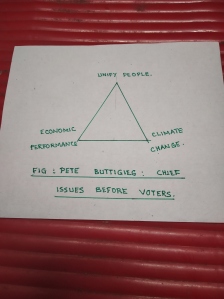 Pete Buttigieg, former Mayor of Chicago,  marked   Unity among Citizens ;  Climate Change Impact ;  and  Overall Economic Performance as the three factors with potential to tilt the voters to one side or the other. His emphasis is on finding common ground –  an essential prerequisite for every Program the leader may envision. 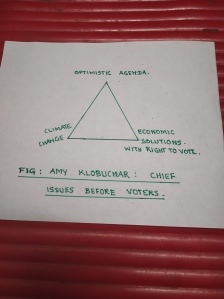 Amy Klobuchar, Senator from Minnesota,  proposed –  an Optimistic Agenda ;  Climate Change Impact ;  and Economic Solutions with the Right to Vote  as the three factors that will enthuse the voters to participate in this election actively. Competency, not just Stature for Leadership is the key to attract voters, according to her. 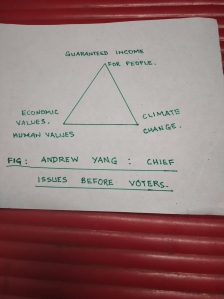 Andrew Yang, Enterpreneur,  picked his three important factors –  a Guaranteed Income for People ;  Climate Change Impact ;  and Economic/Human Values as the urgent need for transformation of the Society and Governance for the People. Courage needs to take over the Corrupt in administration, he urged.

Tom Steyer, Billionaire Businessman,  supports and encourages the three following factors strongly –  Taking down Trump ;  Climate Change Impact ;  and a Clear Strategy to prevent Wars. He strongly advocated collaboration and networking for harmonious relationship within and outside.

What I gleaned from the deliberations :

1.   All the candidates were assertive and frisky throughout the session not wanting to be left out in the picking order even by a millimetre.

2.   There were no attempts to stray the minds of other candidates and almost everyone was arguing to the point without any deviation.  Elizabeth Warren and Amy Klobuchar, nevertheless, displayed openly their penchant for taking on Pete Buttigieg (Warren on racism, and Klobuchar on age and experience). To their credit, it needs to be made clear that they must have stolen the thunder in the Hall ultimately with their stellar performance.

3.   Almost everyone appealed to the audience in the right measure with seemingly unbiased and forceful arguments full of gestures and body language elevating their performance(s) even while giving credence to the fellow candidates’  arguments.

4.   The emotion of the moment, coming just after the Iowa Caucus without the results being made clear for 4 days called for calm, composure, and comprehension,  and every participant stuck to the dictum without any deviation. This is an excellent aspect of this debate.

5.   A clear respect for everyone’s views was something this debate displayed positively and that every listener and viewer can be proud of.

6.   As is her wont, Amy Klobuchar, excelled in putting forward her points with supporting facts and real life happenings to gain the trust of the audience/citizens. To say that she beat them all with her superlative performance in this debate is saying the obvious.

7.   Joe Biden had his best in this debate. He was very clear about his points ;  he displayed an excellent understanding of the topics ;  and he held his composure well even in testing situations. He also bids for the frontrunner’s  post.

Conclusion :  Billed as the most consequential Democratic Presidential Primary Debate, it stood the test of the Candidates’ depth of knowledge of issues ;  their mode of Presentation to the audience ;  detailing the issues and solutions ;  justifying the need for changes where felt ;  and drawing feasible inferences.