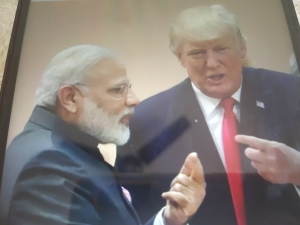 ” Two patriotic leaders from the largest democracies of the World ;

Two commanding leaders whose Leadership style is blazing a trail in Governance, a paradigm atleast for some nations to emulate;

Indian PM, Narendra Modi and US President, Donald Trump will come together for the second time in an event christened “Namaste Trump”  in Ahmedabad on February 24,  2020.  (The first event was on September 23, 2019,  in Houston, Texas, U.S.A., christened ‘Howdy Modi’  at the NRG Football stadium with the motto of ‘Shared Dreams, and Bright Future’)

Dubbed sincerely as meeting of ‘minds, PM Modi and President Donald Trump will likely discuss global issues, defence deals, and immigration of technical personnel with similar ideas. Trade deal will be missing this time too.

Will  President Donald Trump’s visit, mainly intended to strengthen the strategic partnership, change the course of Citizens’ lives in either country cannot be judged at this juncture clearly.

Both have their  ‘brands’  established in their respective countries indicative of the nation’s standing in general as perceived by people beyond any financial considerations.

A novel thought comes to my mind :

How would it be if we can measure the  “value”  generated by the  “brand”  to help make the comparison between the two possible ?

What elements/characteristics should be included if we are  to genuinely go forward in this attempt ?

1.  Number of people attending the event(s) can give a measure of the success of the event and the brand value of the leader(s).

2.  Cost of the event in terms of the amount spent by the respective government(s) in hosting/conducting the event.

3.  Rate of Return as measured by the amount of press coverage and conversations in public lasting for  number of days/weeks following the event in the city/country.

4.  Any significant deals struck between the nations for the benefit of citizens of either nations. Quantification of benefits in terms of accruing well being and financial enhancement needs to be worked out.

5.  General boost to the individual leaders in overall terms nationally and internationally in some measurable numbers,  say,  popularity %,  acceptance %,  performance rating  (before and after).

I present below some statistics that any researcher will look for in this regard :

Gujarat population :  62. 7 million. About 7 million People (Indians) are likely to attend,  i.e. 11.17%. Ahmedabad city population : 5.57 million, hence percentage of Indians will attend is 125.67 %. It means people from other cities/states may also take part.

India’s  population is roughly 4 times that of America. 1.37 billion vs 350 million. This is a major consideration in analysis.

Howdy Modi event was organised with the help of collected funds from Indian origin Americans and NRI.  Preliminary estimates record the Ahmedabad event to cost Rs 100 crores by the Government.

“Namaste Trump”  event is not over yet. It is also not the intent of this author to  make any study and present or publish the same anytime, anywhere. This is only to accend the interest of any researcher in this subject. Value of the study can be enhanced by adding any other relevant elements to make it comprehensive.

Tidbit  :  ”  A novel study at the highest level of Governance and Leadership,  a harbinger to a new vista “.