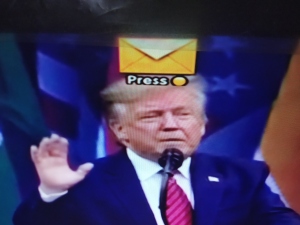 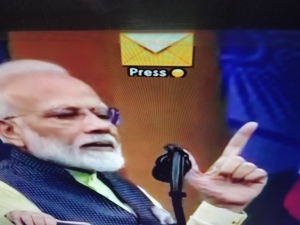 From September 22, 2019  to  February 24/25,  2020.  From  ” Howdy Modi ”  to  “Namaste  Trump”.  From Houston to Ahmadabad/Delhi. Not just warmer days and blossom-laden boughs of trees/bushes, but warmer and blossom-laden relationships between the two largest democracies emerging out of mother earth.

India will be hosting the event – POTUS, FLOTUS, Ivanka Trump, Jared Kushner, and the complete entourage – on its soil for two days in the shortest month of the year, February.

1. Make it an important period in the history of the country ;

2.  Make it an outstanding political/diplomatic achievement of this decade;

3.  Make it significant in a way that marks the relationship between the two countries.

Means to achieve the above :

Understanding one another well ;  building strong relationships at various levels of government and business ;  continue deals ;  and  formulate action plans into specific timelines.

A Skeletal Framework of the Purpose of the Visit :

This is from a common man’s pen :

Figure below represents the  ‘Sense of Purpose’  of President Donald Trump’s Visit : 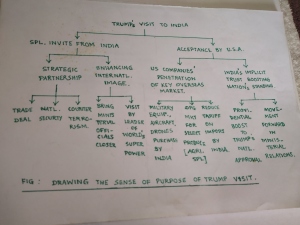 At the First level, I have placed the Special Invite and the Acceptance from U.S.A.  as the two primary conditions that effected in its consummation.

At the Second level,  I have placed ‘Strategic Partnership’  between the two nations, and   ‘Enhancement of International Image’  as the two chief interests from Indian  perspective. US  companies’  penetration of a key Overseas Market,  and India’s Implicit Trust in the initiation of this visit boosting America’s standing will likely form the core of the President’s visit, American perspective.

Proceeding to the Third Level, the interests stated above are expanded. Striking a possible trade deal ( President Trump has already stated this to be set for a later date and time, after the US general election );  discussions on Initiatives and  Counter terrorism at global, regional, and local levels ;  and National Security Protection measures as the three elements constituting the Strategic Partnership moves. Enabling and consummating the visit of the Leader of World’s Superpower, and bringing Ministerial Officials of both sides closer constitute the Image Enhancement move by the Government.

Consummating sales of Military Equipments, drones, and aircrafts to India ;  Opening the Indian Market to select products, specially agricultural, from America ;  and reduction of Tariffs on Select items from America by India – form the crux of attention in terms of US  Companies’  penetration of a key market.  President Donald Trump is also fully cognizant of the boost his approval rating will receive back in America even while sharing the Indian perception of an important step forward in Ministerial relationships between the two countries.

Conclusion :  The visit of President Donald Trump will help strengthen Nationalistic and Democratic flavor of the two nations is the belief. It is also expected to fulfill the first step of a united focus on development, peace, and welfare rebuilding the trust and friendship between the two. Whether this will set a new period in Indo-US relationship is  what everyone will be watching. This, nevertheless, is a proud achievement for both. It is, however,  well known that President Donald Trump is an expert at effectively using such occasions to promote clearly what is essential for America and American interests. At the “Howdy Modi”  event,  Donald Trump waxed eloquent about  ” Space cooperation ; Defense Equipment and deals ;  LNG exports to India ;  Manufacturing deals ;  Border Security –  all emphasizing the need to preserve the freedom and security for India. How he will strategize marketing this time is anybody’s guess.

An authentic event that is more than just common.

Tidbit :. ” A new point in US-Indo relationship may well be on course “. 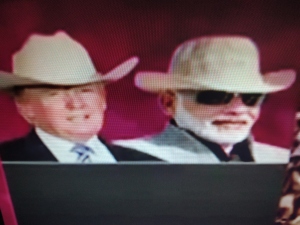