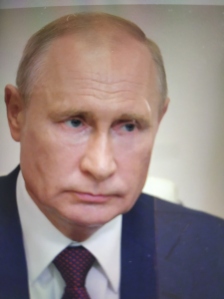 Just as belief and emotion cannot be separated, so are Communism and Dictatorship. Doctrine of absolute rights and dictatorship is the fundamental guiding principle here. Russia under Vladimir Putin ;  China under Mao Zedong ;  Cuba under Fidel Castro ;  and a few other communist regimes have all existed as dictatorial regimes with complete power over people. The general feeling amongst the dictators that they will last permanently and in the end find themselves betrayed by their own associates has been recorded again and again in history.

Dictatorship has taken a different form in this 21st Century.  ‘Dig oneself in  behind the shield of democracy’  is the prime goal of leaders in many places. Election of Vladimir Putin (67) has made himself an immensely powerful Political Force in the World. The methods adopted and the circumstances under which Vladimir Putin grabbed absolute power may be subject to serious discussions, but he was clever in not allowing any obstacle in his path to accomplish his Aim.

That Russia’s  Opinion Referendum has enabled a  stable Government for the future years is a positive sign, though. When the entire world is struggling for measures to combat COVID-19 with its impact felt seriously in World economy ; jobs;  and unemployment,  Russia’s efforts to remain stable even if by undemocratic manoeuvres has to be recorded as a good outcome.

When Russia’s  former Intelligence Officer (KGB), Vladimir Putin, became the Leader in 1999, the thought of him becoming an unshakeable political force was simply beyond dreams. Except for a four year period between 2008 and 2012 when he was the Premier, he has held the position of President in all remaining years.

This Opinion Referendum ( between June 25  and July 1) has permitted Vladimir Putin to continue for two more full terms of 6 years each (uptil  2036). This, in addition to the remaining 4 years of his present term. It is against the background of  “Constitutional Reforms”  advocated by Putin that he succeeded in this. The question arises as to why he chose to conduct this now when he has another 4 years without a hurdle.

Reasons can be found in the following :  First, the havoc caused by COVID-19 that was not anticipated in the early stages ;  Second, the damage caused to its Economy ;  and Third, but not the least,  the declining popularity of Vladimir Putin as the undisputed leader. Sweeping air of insouciance amidst the COVID-19 tragedy actually raised Vladimir Putin’s chances of success in this referendum.

The fairness and probity of the referendum was always in doubt ;  there have been violations of rules and irregularities throughout the period of voting ;  citing the dangers of COVID-19, opponents have been prevented from engaging in campaigns ;  there were complaints of ballot fraud ;  freebies promised and doled out to the voters for supporting the Constitutional Reforms ;  part of the referendum was conducted on line ;  there were failures of supervision and checking of votes – People did not seem to have any other safe option but to accept Putin’s decision.

Significant to note is the fact that Putin did not conduct this referendum solely for the purpose of extending his reign. He proposed several changes in the guise of Constitutional Reforms, one of which pertaining to the removal of the fixed term rule.

He had included in his proposal, aspects like :  (1)  enhancement of retirement benefits ;  (2)  minimum wages ;  (3)  ban on same sex marriage ;  and  (4)  faith in God –  as fundamental items in the changes. Voters are thus compelled to vote on the basis of the reform in its entirety only. Retirement benefits and Faith in God were the factors that firmly tilted votes in favour of Putin and not necessarily for his rule continuing in unbridled fashion.  78.56 %  voted  “yes”  ;  and  21.44 %  voted  “no” in the referendum.

Everyone will be aware of what happened in China a couple of years ago when President Xi jinping was conferred the status of a ‘lifetime leader’.

Stalin, Mao, Lenin, Hitler, Mussolini – all set out to enhance and enlarge their powers permanently in life.

This is the cake that Vladimir Putin held in his hands and now eating it too.

” Power may well be an enabler ;  Will time remain silent ?” –  is the 64 thousand dollars question.

Tidbit : ” Voting is completely unimportant ;  what is extraordinarily important is  …  …  who will count the votes ; and how?” –  Joseph Stalin.