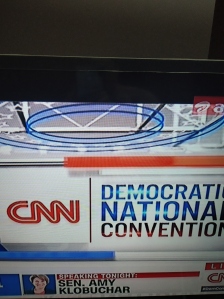 It was a Momentous occasion on a Special day of Colourful participation. Momentous because of the growing consensus of opinions for the nation moving forward ;  Special because of the nomination process detailed in terms of national delegate count statewide ;  and Colourful because of the proceedings full of variety in a way making the entire day exciting and interesting.

There were many speakers.

Stacey Abrams, former Georgia Governor candidate, in her address called for responsibility and accountability and urged that we should win ; Democrats should win.

Sally Yates, former Acting Attorney General, held that Public Service is intended to defend the Constitution. Integrity, compassion, service, and kindness are the qualities of Joe Biden that make us want him to be our Leader.

Senator Chuck Schumer, (D) Minority Leader, said : “Winning the battle for the soul of our nation with Joe Biden as President is our goal”. A man of integrity and honour for our country’s values;  we can all have a brighter future and a new day with him as Leader.

Late President Kennedy’s daughter ( Caroline Kennedy ) and grandson addressed the Convention with a clear call that we must elect Joe Biden. 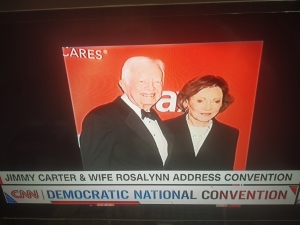 Jimmy Carter and wife Rosalyn Carter addressed the Convention with the words : “Right person for the moment in our nation’s history is Joe Biden”. 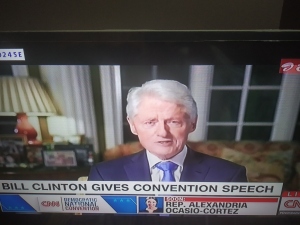 Bill Clinton, former President, while declaring that my choice is Joe Biden, advised concentration and not distraction. He provided an economic recovery map based on his own experiences, of what happened in 2009, and of what can be done with Joe Biden’s  vision suited to our times and changes now. He was honest and sincere even while encouraging people with his words. Criticisms that strike at the heart of policies should be assessed properly. He averred that Joe Biden is the right candidate who will build, back up, and do better for the nation. His speech gave matters of substance for Joe Biden’s  Leadership. In doing all these, he also personally established himself as a staunch Democratic Guru.

Rep Alexandria Ocasio-Cortez, (D) NY,  in her nominating speech said : ” Reclaiming our Democracy with Systemic Solutions in our Crisis Situation is important “. 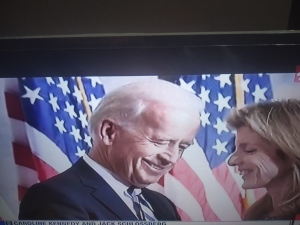 Joe Biden wins the democratic nomination and officially nominated as the Democratic Candidate for the post of President. He secured 3558 delegates and Bernie Sanders secured 1151 delegates.

A video on the highlights of Joe Biden’s history was shown. 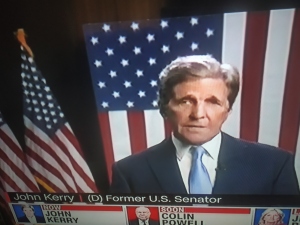 John Kerry, Former Secretary of State under President Barack Obama, in his speech said :  “America deserves a President who will be looked upto and not lost out”. Our military wants a President who can stand up for them. Get nation together with strength and humility if you want to take actions on your plans and programs, he added. Courageous Americans have done what is right for America, and this is the time to exhibit the same to restore our Strength in the world. Nation now remains isolated. We are exceptional because we do exceptional things. Only Joe Biden can lead America the way it is needed. His speech must have helped forge the  “Unity”  that the party hopes to derive at this juncture.

Colin Powell, former Secretary of State under President George W Bush,  glorified the values he learnt as the same he shared with Joe Biden’s parents ;  as the values that define Joe Biden, urging the need for restoring the values to the White House. If we have to stand up to our adversaries, we also need to restore our alliances and hold our ideals dear to hearts. His appeal may have an added element to the requirements of the Democrats. 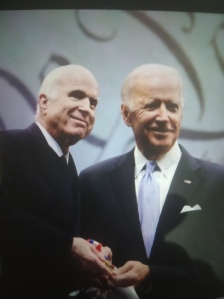 A video on late Senator John McCain and Joe Biden capturing their moments of ‘friendship’ was shown. They served in Congress together for decades. “Trust, International Relations, and the Promise of America have been the qualities that brought them together. They have shown values and what it means for the nation. This is important in Politics also. Some of their values are adherent to either parties like governance, trust, and participation.” They got complimented in their lives too is amazing. They adjusted extremely well to the situations demanding respect or disagreement with aplomb. The general expectation is that it will make a great impact among voters to set Joe Biden apart from Donald Trump. 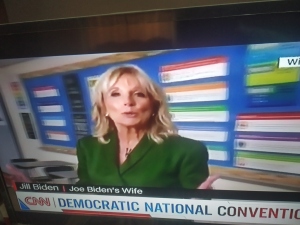 Jill Biden, Wife of Joe Biden, was superb and articulate explaining the manner in which a broken home is made clean and how the same strategic steps could be adopted in the governance of a nation. With love and understanding ;  with bravery and unwavering strength – our goals can be achieved is the essence here. Describing her life’s journey, she compared the family and governance with interesting parallels between them linking their experiences with what can be achieved nationally during this critical period. Leadership worthy of nation is imperative to come out of this pandemic. This is what Joe Biden will fight for. He will do for every American family what he did for us. Keep the Promise of America for all of us. Her short speech was a study in academics and practice at a higher level in Administration in general.

A perfect end to the proceedings of an eventful day.

Conclusion :  The much sought  “Unity”  that the Democratic Party wants to take out of this Convention is gaining momentum. My subjective rating of  “Unity”  at the end of Day 2 stands at  65/35.

Tidbit : ” We need a leader who can keep America Safe “.