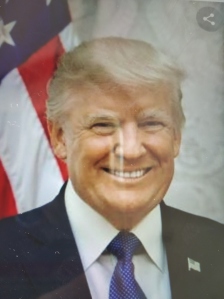 American Presidential Election 2020 is the most critical election in its modern history, not just for the nation (America) but also to the world because of its potential to play a critical role in the overall health of the economy ;  technology ;  and military. American Citizens will be making their once-in-a-lifetime decision in this election that will shape the future of the world.

The two major parties, Republican and Democratic, have reached their potential crossroads placing them in a quandary to choose their policy options clearly. The parties have little time to do the analysis needed to come out with a clear Strategy – Democratic National Convention is already over without spelling out a clear single point vision for its direction, and the Republican National Convention in the coming week also lacking the time needed.

The Programs and Plans that they have so far presented to the analysts, media, and people are all  “reactive” (which rests on adapting to change) and not  “proactive”  (which rests on initiating the change).

There are three main points that need consideration in this respect as given in the figure below : 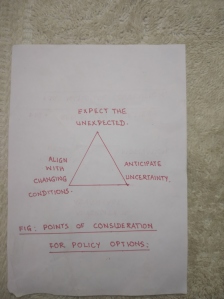 (a)  Expect the Unexpected :  Economy (including jobs, growth, and welfare) and COVID-19 pandemic control are the two major factors expected to play a role in terms of the general perception of people in this election. With the COVID-19 outbreak, itself marked as an unexpected event, its control remains a perplexing problem. It raises the confusion and worries more than submerging them. Mandating facemask wearing, and a Complete shutdown proposed by the Democratic Presidential Nominee, Joe Biden, is not just ambitious but backbreaking and bothersome. It will be the most arduous journey in the imementation process for any individual. There are some reports that a Super Vaccine will be ready by November 3, 2020, with FDA fast-tracking the process of trials of validity and efficacy, about which President Donald Trump is optimistic is a hopeful sign, until it makes its way in the open. This is the  “Unexpected”  that both parties are struggling with.

(3)  Align with changing conditions :  In parallel with the changing conditions of this election (mail-in voting) the attitudes of people towards the election itself should witness a dramatic change this time to make it a success. First, the actions of Presidential and Vice-Presidential nominees of both parties from now on should inspire and raise public confidence. They should be the torchbearers for  “Clean Election”  with mutually agreed plans ;  clarifying any doubt raised by the Citizens by themselves or through media, analysts ;  and making people confident in the ability of  Election Managers/Administrators to handle anything thrown at them. Both the contesting leaders should prepare and organise Programs (even unconventional/virtual) to increase the trust, belief, and faith in them even while persuading with inducements to vote without fail in the election. Nobody should fear for safety or his/her life in voting. Like the management and employees coming to an agreement while resolving a problem, the two major parties should come to some agreement on this.  “How”  is the main task to be evolved. Donald Trump being an astute businessman and politician can get an advantage in this respect.

It will also be interesting to observe the proceedings of the Republican National Convention for the following 7 factors :

(a)  Vision and Mission relevant to the situation of the day ; (b)  Plans and Programs with proactive identification of opportunities as perceived by the speakers ;  (c)  Efforts to empower employees in general ;  (d)  Empathy and Concern displayed by the Presidential and vice-presidential  nominees ;  (e)  Ability to influence Organisations and Perceptions of Citizens ;  (f)  Donald Trump differentiating himself from Joe Biden ;  and (g)  Growth and Recognition of the Party.

Success mantra lies in  ” leading from zero”  which effectively means that the party will put aside all the thread and thrum, and start from a fresh baseline – from zero upwards. “Let go of the past ;  free yourself from failures and disappointments ;  and start embracing new perspectives – just like one does on a New Year day” – failure is not falling down, but staying down.

Every new beginning comes from some other beginning’s end – will this come true for Donald Trump or Joe Biden ?

Tidbit : ” Can this be a new beginning for a clean sweep?”