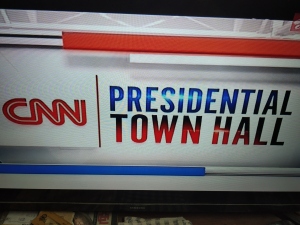 First drive-in Town Hall in American Election History happened in the era of COVID-19 tonight, with just 47 days left for the Election Day. Masks and Social Distancing religiously followed to ensure safety of the Candidate, interviewer ;  TV crew ;  and the viewers around the country.  There were about 100 cars with some people inside the cars and some standing outside too. CNN organised this Town Hall with Anderson Cooper moderating the event.

I present my observations here as a Commonsense exponent watching the event on TV with no claim as an expert in Political Science or even as one with a deep knowledge or experience of Politics. 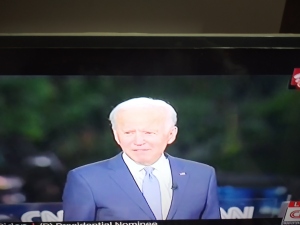 1.  COVID-19 was the first issue as was expected. Figure below represents Joe Biden’s Strategic Control Measures :

The three elements cited include : (a) proposal of National Standards for working safely ;  (b)  rapid testing and tracing plus use of protective gears ;  and  (c)  use of federal funds as resources.

His responses to questions were standard with no new additions to what everyone must have learnt thus far. He reiterated his earlier statement that Governors should enforce mask wearing for saving the lives of people.

To Attorney General, Barr’s recent observation that likened COVID-19 lockdown to ‘slavery’,  Joe Biden countered in terms of what he felt, understood, and experienced as ‘Freedom’ in this country – ” Freedom being taken away is to not let your children to go to school ;  not to let your kids go out for entertainment ; and to not let children be able to meet their affected parents in hospitals “. In the same time he also opined : ” That $ 200 billion are needed to get students to resume their studies in schools. You cannot compromise the immune system “.  One has to make one’s own inference !

He was not convincing in his answer to the question : ” how will you stand up for healthcare workers who earn less than $15 per hour with great difficulties in these circumstances ?”. His reply : “not getting even $ 15 per hour is disturbing and please go to Joe Biden.com for details that I have laid out “. No specifics cited.

He was also not convincing in his answer to the question : ” how he will modify healthcare plan to be of use to everyone ?”.  His reply : ” I’ll reinforce ACA with a public option “,  didn’t seem to carry much conviction either.

First 30 minutes was a bit difficult to deal with, for him.

The three elements making up the triad are : (a) background checks ;  (b) efforts to deescalate the situation ;  and (c) making sure psychologists and psychiatrists deal with the victims duly. His singular goal will be to make the department function in a transparent manner. Resonated well with the listeners.

The three elements making up the triad in this are :  (a)  to make the system completely transparent ;  (b)  ready to condemn violence of any kind ;  and  (c)  remaining firm on not involving military in any domestic unrest. He admitted the First Step Act proposed during his term as VP could not be completed due to reasons unanticipated. President Donald Trump, however, succeeded in getting the attention and praise.

4.  Uncertainty about mail-in voting can be tackled by : (a) striving to ensure that legitimacy will not be questioned by unfavourable actions ; (b)  sprucing up the Postal Services ;  and  (c) actions to enhance the confidence of voters for mail-in voting. Hard task with no specifics.

5.  Joe Biden will deal with fracking to be beneficial to people by not referring to Climate Change as a ‘hoax’  but by using that as an opportunity to create more jobs in energy saving technologies.

6.  Joe Biden will treat  Russia  as an Opponent,  and  China  as a serious Competitor. He avoided the word  “enemy”  in describing them.

1.  Joe Biden’s answers were reasonably  empathetic, facts based,  following science and expertise,  honoring the guidelines of specialists, and committed to people welfare. It occurs to me though that he missed the opportunity to deliver a strong performance.

2.  His tone and tenor in this Town Hall showed that he will be adopting an aggressive approach – as I understand just like an aggressive marketing and ad campaign strategies will adopt – and acting with force in order to succeed in this election.

3.  He may have to an extent succeeded in driving his points locally, regionally, and nationally through this Town Hall performance, but it remains to be seen if this will drive Citizens to vote in huge numbers as Democrats wish to happen. 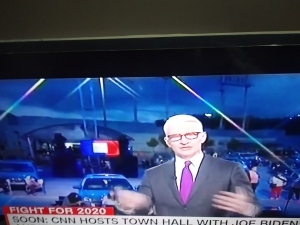 Tidbit :  ” A divided nation ;  and a world in disarray is what  Trump has given ” – Joe Biden in the Town Hall.