” About President Donald Trump’s Decision not to Participate in a Virtual Debate ” – October 9, 2020.

President Donald Trump possibly remaining contagious still forced the Commission on Presidential Debates to hold the 2nd Presidential debate (October 15, 2020) in a Virtual format with candidates President Donald Trump and former VP Joe Biden in remote locations, and the moderator with participants in Miami, Florida. This is to protect the safety and health of everyone involved in the debate – according to the CPD.

President Donald Trump expressed his disagreement of not doing a virtual debate, but instead holding a rally.

Former VP Joe Biden expressed his willingness to the change in debate format as announced by the CPD, but also added that he will hold a virtual town hall event in the event of President Donald Trump not accepting to participate in the deabate.

Figure below represents the fundamental debate structure in the form of a simple triad: 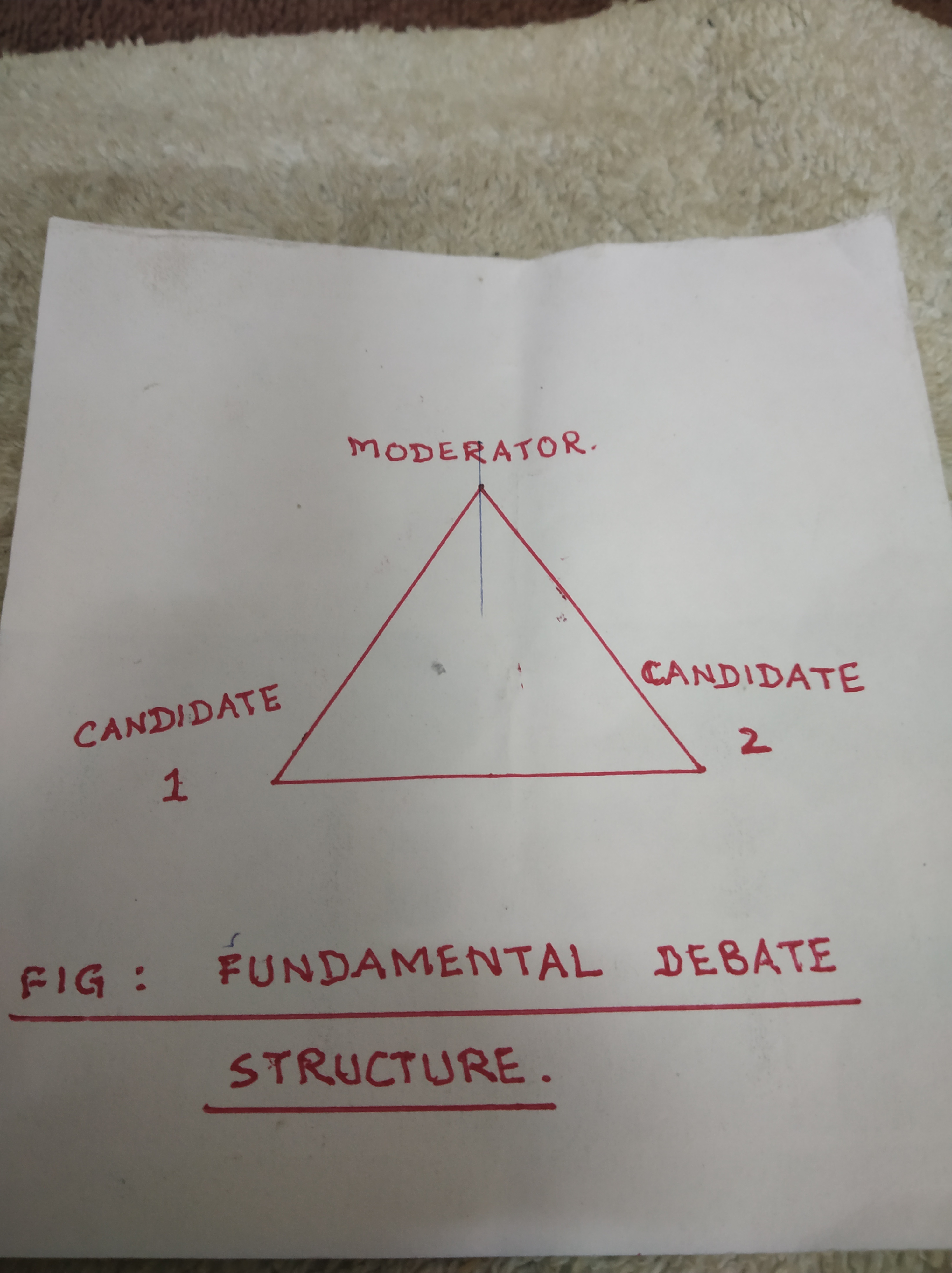 The basic foundation of a debate is the structure and environment provided by the debate hall/venue that will promote answers to the moderator’s questions ; opinions/views on the topics of the debate ; and the connection that the debaters expect to build with the viewers and listeners. This is what will make a perfect debate hall and environment. The two debaters and the moderator constitute the three pillars of the debate setting and it is necessary that they are physically present in the same place in any genuine debate setting. With participants in the hall of the debate already limited, the orientation of the debaters in trying to face the participants directly ( in good numbers ) remain already limited stifling the interests of debaters ( cheers of encouragement to good points, interventions, replies from the participants driving the motivation factor removed completely ).

There are some factors that need consideration here :

1. Virtual debate is not “real” and in fact disrupts the atmosphere of the debate hall. In real situations the debaters can do justice in terms of how well they can engage Peoples’ attention to non verbal cues and gestures ; reactions of aggression or otherwise to the points made ; and the force and power of rebuttals. It is the experience viewers lose when the debaters resort to face to face exchanges and rebuttals. It is also likely that viewers will feel the debate itself boring.

2. The moderator will have great difficulty leading the debaters with questions ; stopping interruptions ; controlling unnecessary exchanges and extensions ; and posing follow up questions to further explore the thoughts of debaters setting the dynamics of the debate on course. It means simply that there will be difficulty in monitoring the debate perfectly. A new challenge to the Moderator.

3. Although both the debaters of the day come with vast experience in public life – business and political – it is uncertain at this juncture as to how they will feel the “isolation” of remaining in remote places and whether that will impact their real performances even while accepting that it will be a new experience.

4. President Donald Trump avoiding the debate ( even while his decision is correct ) may well be interpreted as his personal dislike and not due to the change in format. President Donald Trump may also be squandering a chance to recover his lost ground in the chaotic first debate. ( Whether viewers will take this seriously is not known yet ). Pros and cons notwithstanding he may find support from people for his bold attitude.

5. Former VP Joe Biden’s keen interest to speak directly to people in terms of a virtual rally will likely add to the gains he has already scored in the first debate. He will be seen as being honest and sympathetic. Biden’s likeness of the CPD doing the right thing in format changes in this critical and risky times of the global pandemic may resonate well with his supporters.

IT REMAINS TO BE SEEN IF THIS IS A BLISS OR A MISERY !

Tidbit : ” Decision on who is the real winner will be extremely subjective in this debate, when held. “