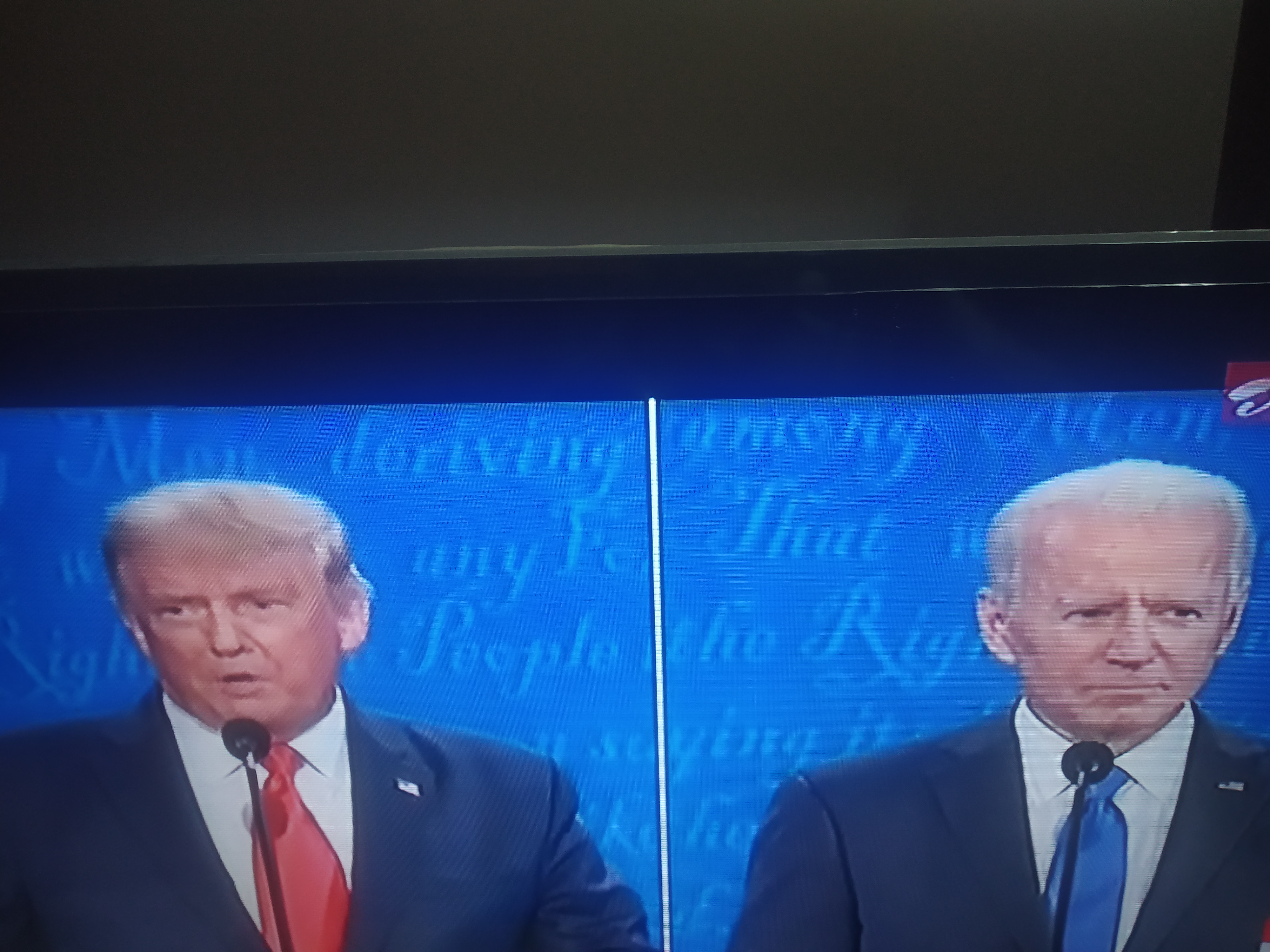 Two candidates facing one another for the last time in a debate with the Prize of President at stake : one rejuvenated after falling a victim to the Coronavirus attack himself presenting his views and policies in fundraisers and rallies in Florida, Georgia, Nevada, North Carolina, Arizona .. trying to project a more positive image of himself ; and the other with seemingly invincible poll advantage giving leeway to lessen the mass rallies but concentrating more on debate preparations.

The two candidates are the incumbent President, Donald Trump, (Republican) and former VP, Joe Biden (Democrat). Both candidates tested negative for Coronavirus prior to the debate.

With 12 days to go for the General Election on November 3, the two candidates stood 12 feet apart in their final face off to speak and influence the voters.

The debate was held at Belmont University, Nashville, Tennessee.

In the Background : (a) President , Donald Trump, was trailing in the polls by at least 10%. (b) About 46.4 million votes have already been cast. There were 222,925 deaths due to Coronavirus ; and 8,395,100 cases of Coronavirus totally in the U.S.A. now. (c) A morale boosting forceful 35 minutes speech by former President, Barack Obama, campaigning for Joe Biden at 6.30 p.m. Wednesday, October 21, 2020, in Philadelphia. (d) John Ratcliffe, Director of National Intelligence, and Christopher Wray, FBI Director, at a Press Conference at 6.50 p.m. on Wednesday, October 21, 2020, alleviating fears due to interference in the elections by Russia and Iran, which obtained information on Voters’ Registration. and (e) FDA approving Remdesivir for treatment of patients hospitalized for COVID-19. First therapeutic drug to receive the FDA approval on October 21, 2020.

There were six segments of 15 minutes each for a total of 90 minutes covering the following topics : COVID-19 ; National Security ; American Families ; Race Relations ; Climate Change ; and Leadership.

Both candidates made their cases equally well to create an identity for themselves. However, there has not been any specific plans from either for COVID-19, Immigration, Healthcare, Relief Bill, or Climate Change.

President, Donald Trump’s gist of arguments can be summarised as in the figure below : 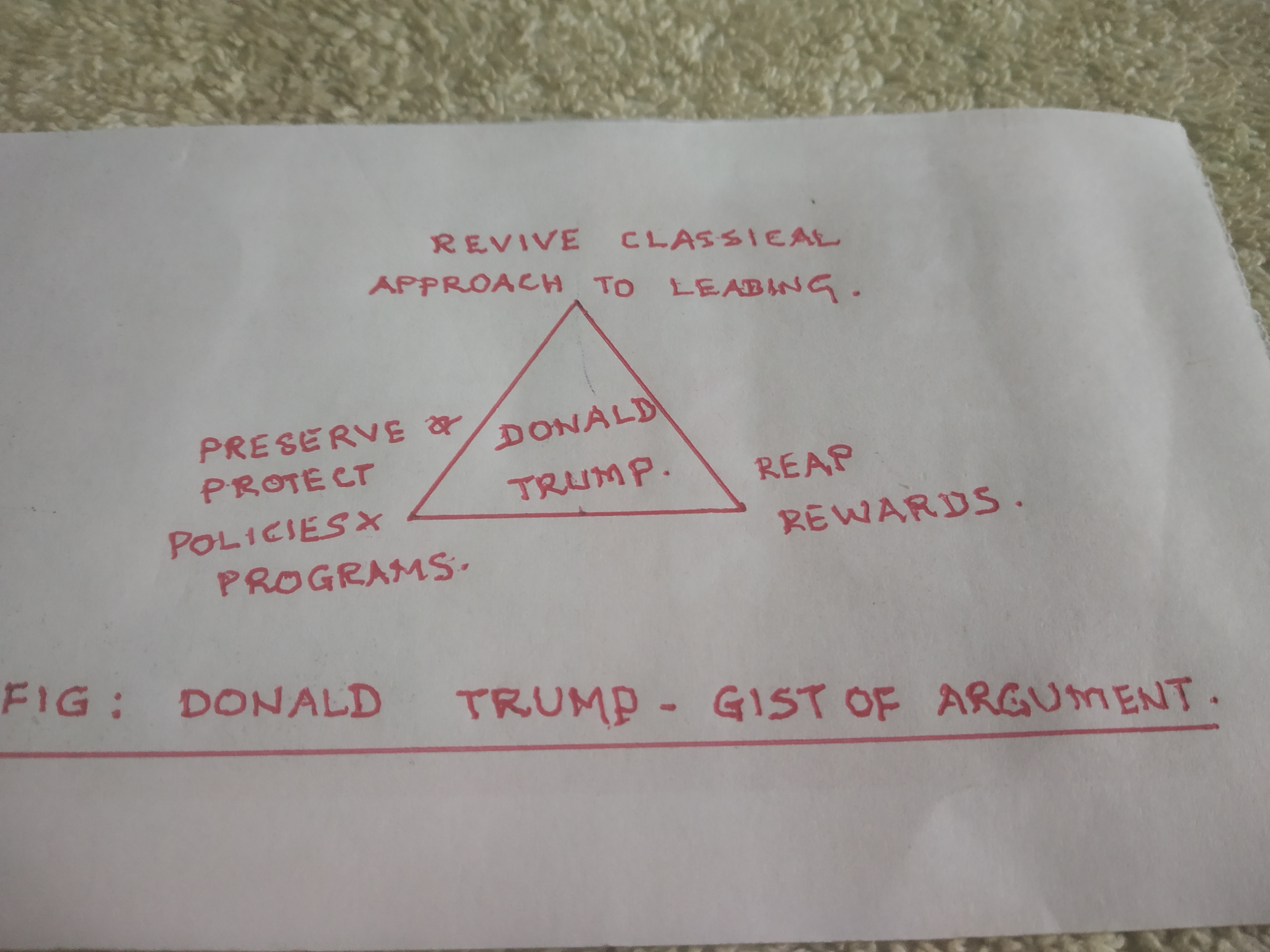 His Leadership style will reflect the revival of Classical Approach to governance, a style that depends upon solving the problems of Citizens, be it economy, education, health, safety or environment. He will strive to preserve and protect the policies and programs initiated during his present term. Help make all Citizens reap the rewards of his initiatives. He was optimistic that Coronavirus will go away without alluding to specifics (other than a vaccine to be ready by the year end) or timeframes. Touting the termination of the individual mandate through legislature and promise to protect those with pre existing conditions, he asserted that he will run the program as well as he can. He called Joe Biden’s program as “socialised medicine”. Blaming Nancy Pelosi for his inability to pass the relief bill on time, he reminded the three bills that have earlier been passed to his credit. He listed his efforts on Criminal Justice Reform, Prison Reform, Opportunity zone bill, Tremendous resources deployed, Uplifting historically black colleges and universities, Providing 10 year long term funding – emphasizing that not since Abraham Lincoln has anybody done what he has done to the blacks. Cleanest air, cleanest water, and best carbon emission standards are his accomplishments, according to him. Voters are the final assessors.

Joe Biden’s gist of arguments can be summarised as in figure below : 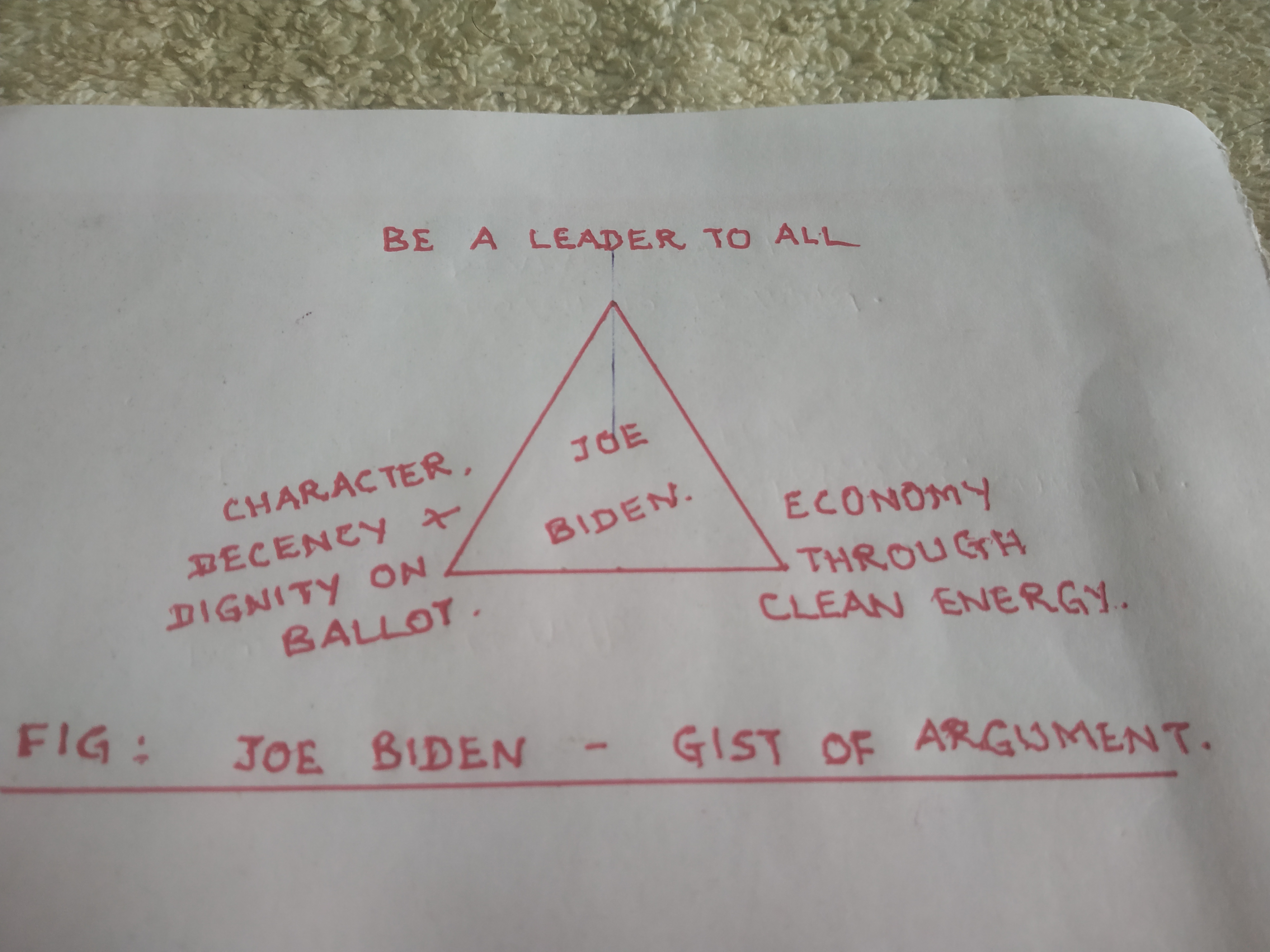 Joe Biden will be a leader to all Americans with no distinction whatsoever ; he will strive to build the economy through clean energy programs ; and character, decency, and dignity on the ballot will be the deciding factor for people to vote. He opposed Donald Trump saying, ” People are not learning to live, but they are dying “, I will shut down the virus and not the country. His main argument was centered around President, Donald Trump, ignoring to be truthful in statements and not being transparent in his disclosures. Any country interfering in our elections will pay a big price, he warned. On healthcare, he promised to lower premiums, offer cheaper plans, and make drug prices affordable. Relief bill to concentrate on bailing out small businesses. Moral obligation to protection of environment, in another 8 years we may be reaching a point of no return according to scientists if actions are not taken – the reason that I am running, creation of millions of new jobs, 50000 charging stations on highways for electrical vehicles, and providing enormous opportunities to citizens are at the heart of his programs.

Moment of the Debate :

Donald Trump’s words in the segment on Racism in America : ” Here we go again with Russia. Is the laptop a Russia hoax ? You are kidding ” – to Joe Biden. Reminded of President Reagan’s famous words in his debate with Carter.

The chaotic first debate with the criticisms that followed for days prompting the CPD to change the format with the decision to mute the microphones when the candidates speak (so audience will not hear, should there be unwanted interruptions) did make the task of the moderator less troublesome in controlling the anger, excitations, and interruptions during the debate. It was a delight to watch the orderly debate.

Conclusion : America needs a strong Government and a strong leader in this critical time. Both candidates showed positive nerves to take on the responsibility. Both in their seventies and still going strong as seen in this debate. President, Donald Trump, appeared to be strong willed. He also showed that he can be different without being aggressive in this debate. Will this make amends to his failings in the last debate ? May be, may be not. Debates are, however, over. Who will give the victory speech on November 3/4 is difficult to make based on this debate.