Angels from heaven sprayed flowers with their blessings on to New Zealand team in Southampton, UK, as they etched their proud name as the First Victor in the WTC match finals against India on June 23, 2021.

I now turn briefly to post the key details I gleaned from this match.

New Zealand made mistakes in the world cup one day finals in 2019 that was decided by the boundaries scored after the Super Over also ended in a tie. They seem to have converted their playing skills, mental, and emotional strengths considerably to secure this trophy. Kudos to the team, management, cricket board, and the nation. New Zealand proved that it is a “genuine contender” for the finals of this two year long cricket extravaganza.

Kane Williamson worked out his plan with exactness and details ( selecting the team on strengths and opportunities) to the highest degree ; he seems to wield a sort of extra human powers that makes him a great leader of this team. He brought energy, fullness, and details through his individual performance in both innings and there can be no doubt that this New Zealand team with his proud and motivated members will hold many more trophies in future. From 8th just 7 years ago (with only Bangladesh and Zimbabwe behind) to 1st (numero uno position) today has been “blood, toil, tears, and sweat” to imitate Winston Churchill’s words.

Figures 1 and 2 below depict the performances of India and New Zealand succinctly : 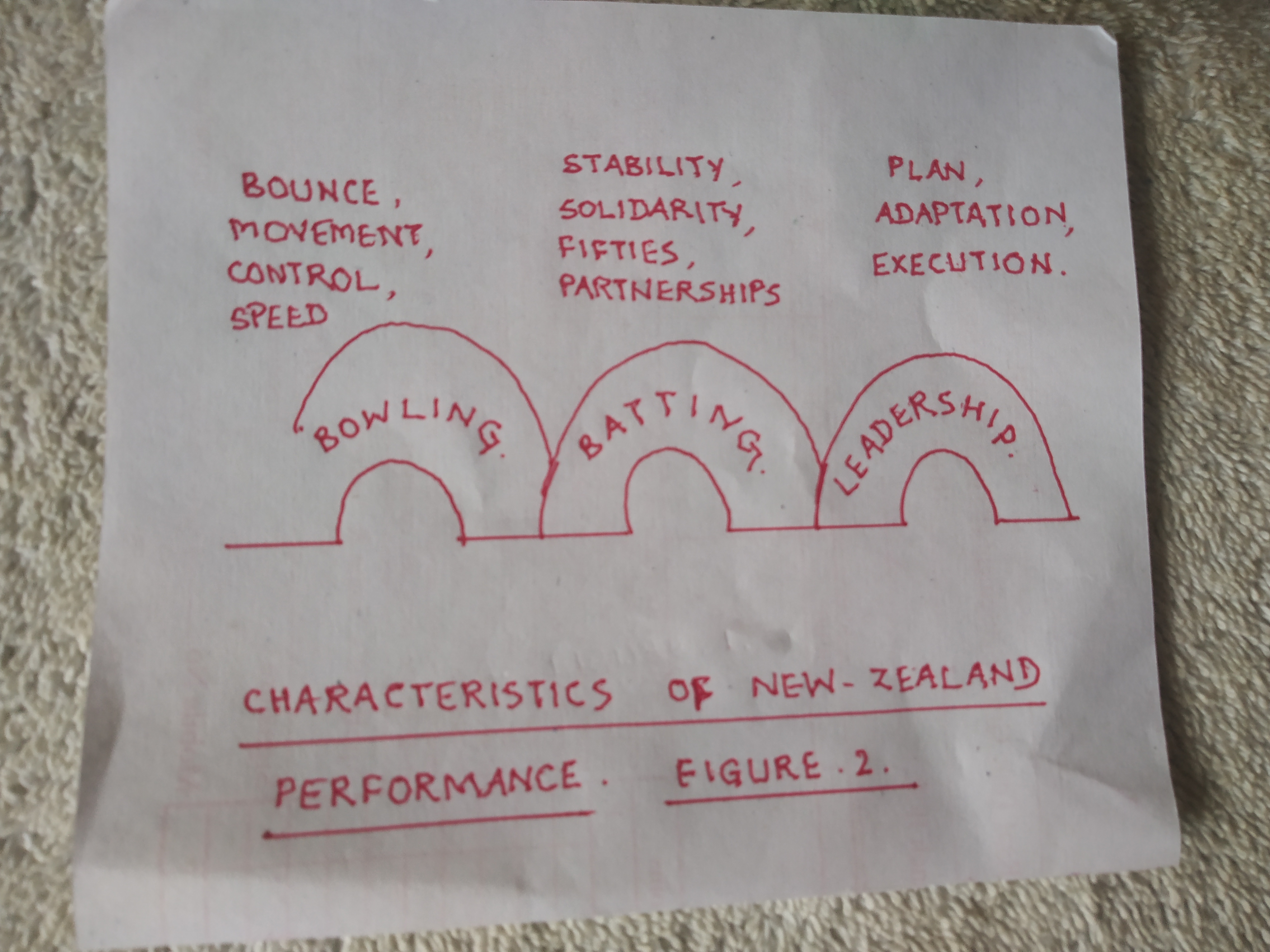 2. New Zealand achieved excellent stability and solidarity by their tail enders ( last 4 batsmen posting a valuable 58 runs) in their first innings compared to a combined 51 in both innings by India. New Zealand made exciting fours and sixes during that time marking their aggression. They played a truly positive game setting the stage for the final overs. The players seemed to be mentally and emotionally striving for victory though it remained outwardly concealed.

3. New Zealand bowling has also been characterised by excellent control with better bounce and movement ; controlled accuracy by all the seamers ; and good speed and aggression – becoming effective in both controlling the flow of runs and taking wickets. Kyle Jamieson has been spectacular while trapping Virat Kohli in both the innings. Their bowling plan proved to be more than adequate and effective.

4. India on the other hand failed to judge the pace and movement either missing or taking a few blows with impunity. But for the opening partnership between Rohit Sharma and Shubman Gill in the first innings and the one between Virat Kohli and Ajinkya Rahane later ( both partnerships, however, could not touch the 100 mark while proving to be inadequate), and the lone and desperate streak of aggression from Rishab Pant in the second innings, Indian batting overall failed to accelerate when needed adding pressure to the batsmen consistently.

5. Ishant and Shami’s astute swing, pace, and variations were neutralised by the surprisingly ineffective performance of Bumrah lacking tight control throughout the match. New Zealand’s choice of four pace bowlers ultimately proved positive, definitive, and conclusive against the strength of the Indian batsmen.

New Zealand team proved victorious in David and Goliath fashion as they took the challenge better than India. They responded better to the difficult conditions and the hardships with resilience. This WTC Final has been a “Cricket Epic”. Even misses in the proceedings reinvigorated them. Only time can tell whether a Special Cricket Docudrama on this will be made by any film producer.